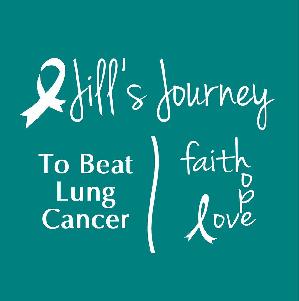 Thank you for supporting Jill's Journey to Beat Lung Cancer!!

At the age of 48, Jill was diagnosed with Stage IV Non-Small Cell Lung Cancer (NSCLC) Invasive Mucinous Adenocarcinoma (IMA). As a never-smoker with no symptoms, it was quite a shock. It was first seen inadvertently on a shoulder x-ray taken in September, 2016. Over the next several months Jill underwent a repeat x-ray, chest CT scan, referral to a pulmonologist, negative PET scan, inconclusive CT-guided needle biopsy, and then finally referred to the thoracic surgeon, who performed a mediastinoscopy and right-lower lobectomy on 1/4/17 at Northern Light's EMMC in Bangor. Jill and her family received the devastating news after this - it was confirmed to be cancer. Fortunately however, it had not spread to her lymph nodes. A subsequent brain MRI, multiple full body bone scans and abdominal CT scans provided more good news - no metastisis outside of her lungs.

Jill reached out to Cleveland Clinic and Dana Farber for second opinions. She still had nodules in both lobes of her left lung. After much consideration, and agreement from her oncology team at Lafayette Family Cancer Institute in Brewer, Jill underwent a second lung surgery at EMMC on April 27, 2017 where an upper left wedge resection was performed. Jill then received four adjuvant chemo treatments over the summer, and finished her treatment with five sessions of Stereotactic Body Radiation Therapy (SBRT) at the Lafayette Family Cancer Institute in September of 2017.

Jill is presently stable; monitoring her lungs for the possible return of the cancer with regular CT scans. She feels extremely blessed to have discovered her cancer before it spread, and to have been able to complete all of her treatments locally. She has been back at work full-time since late September, 2017, and is living a fairly normal life - enjoying spending time with her family, watching her son play sports, learning new things, and helping others. Jill cites "Faith, Hope & Love" of family and friends as what got her through her treatment and to this point in her Journey to beat lung cancer.

In 2018, Jill wanted to give back by helping others who are affected by cancer in our local region. So, she started her own Champion The Cure Challenge team, "Jill's Journey" and with the help of all of the team members, including family, friends, and co-workers of both Jill (at GE Bangor) and her husband Scott (at Northern Light Health) they raised over $4,000!!!